My friend Catherine gave me an awesome birthday gift. It was 7 months after my birthday, but worth the wait. She made me a kit to make concrete candle holders. I’ve been intrigued by the concrete crafting for awhile, but a little intimidated by doing it inside with out making a big mess. Having everything provided and a little bag of concrete gave me the confidence to try.

While I am a novice concrete crafter, this wasn’t the first time I’ve messed with concrete. My dad liked to drag me in to foundation, sidewalk, and floor pouring. So my experience was all on a much bigger scale.

Catherine provided me some containers to use, but I decided to gather a few more. I decided to use the little solo cups for the tapered candles and gathered two gelato containers and two beer bottles to make holders for the votives.

After spraying the containers with cooking spray, I mixed the concrete and quickly poured it in the containers. The instructions said to wait around ten minutes for the concrete to set before sticking the inner container in, but if I did it again I would wait a little less. I used the candles themselves to create the hole in the little ones. I just stuck them in, but I later saw where you should wrap plastic wrap around them first. This seems like a smart idea, but mine didn’t get too dirty. For the gelato containers I stuck the beer bottles in. They were harder than I expected to stick inside (see above on the waiting less time) so I had to wiggle quite a bit and the sides came up unevenly. I decided that I liked the uneven look and pushed forward. After five minutes I pulled the bottles and candles out and let the concrete set a bit more.

After about an hour I easily popped the the little ones out of the cups, but the larger ones presented more of a challenge. I think the plastic might of expanded a little bit due to the heat from the concrete setting and since the walls of the container were straight up and down and the top didn’t expand, they didn’t want to come out. After some tapping on the floor I got them to move a bit, then ended up cutting the bottom off using a box cutter and then pulled them out the bottom. So remember that when you’re choosing your mold. 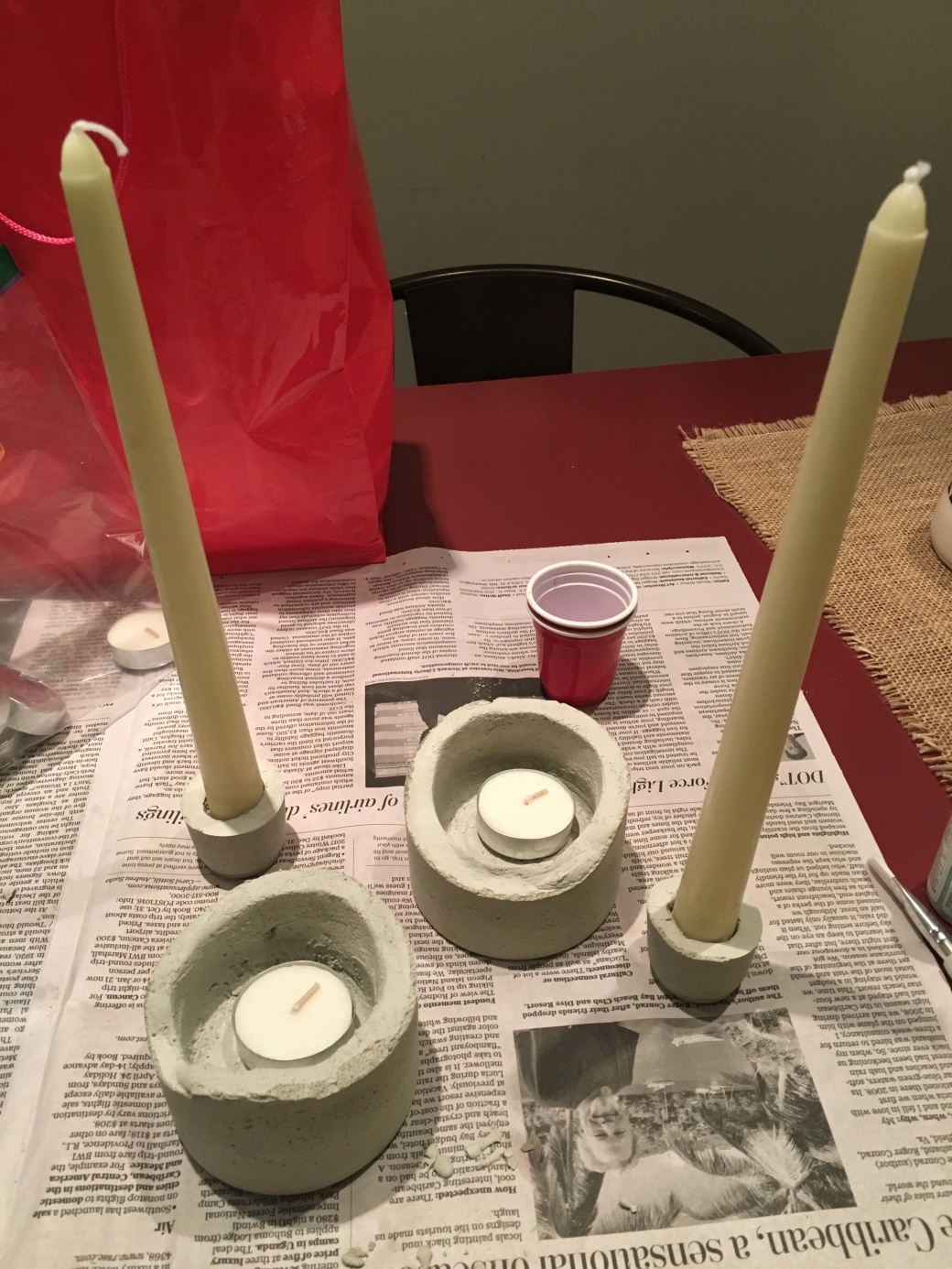 I liked the rough look so I didn’t really sand them at all, just knocked a few of the looser pieces off. Then I let them sit and cure for a week. A week is not necessary, it is just what happens sometimes. I used some painters tape to marking off a triangle on one and a straight line around the bottom of the other and painted a thin layer of acrylic paint.

I think they turned out pretty cool, but I would like to try working with concrete some more now that I have a little experience.