Hills. Everyone warned me of the hills. I misread the elevation chart to read around 300 feet of elevation gain, but really it was 872 feet of elevation gain and 870 feet of elevation loss. To picture what that looks like think of a hill you wouldn’t want to stop on with a stick shift vehicle, that lasts for a half mile and then repeat that a few times. There was a reprieve on the river front path, but that only lasted a few miles.

When we arrived in Charlottesville I already knew I was in trouble. While I incorporated hills into my long runs and a few of my shorter runs, I didn’t do any true hill workouts. As we drove around the hills grew. The packet pick up was at the start/finish of the race. The pre-race material said there would be an “expo” but it was more like packet pick up plus some boyscouts handing out safety material

My race day started like many of my recent race days- early and rainy. The rain chances had come and gone many times and when I woke up at 5:30 it was gone, but then by 6 when we were heading to the starting line it was raining.

The advantages of a smaller race is we could park in the parking garage a block from the start. Brian was able to hang out with me until a minute before the start and it wasn’t hard to find each other along the course. 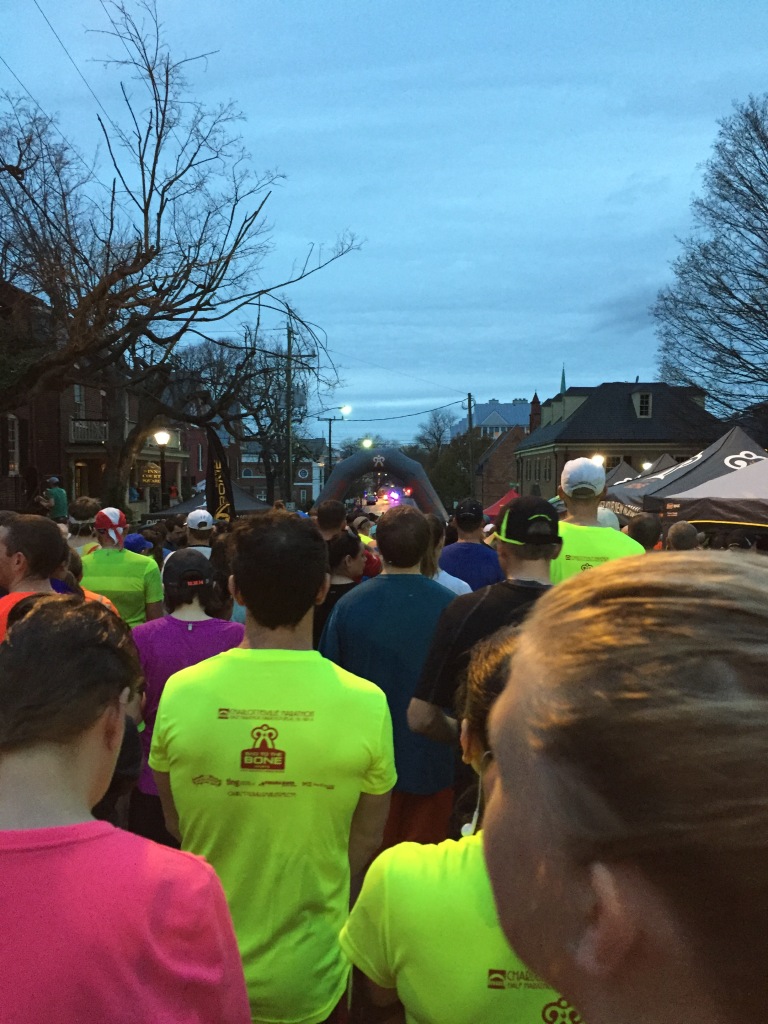 The race started on time and the rain let up a little right before 7. Soon we were off and running around downtown. Soon I realized I didn’t really practice running down hill either. With the wet and rainy roads I was probably a little too cautious but I tried to just let go and fly down the hills.

After downtown there were some Monster Hills, both up and down. I tried to stay steady up the hills and enjoy the down hills. Around mile 3 we arrived at the river and onto a fairly flat trail through the woods. It was nice of the race organizers to add this two mile section for a little rest before some more big hills. Right before the turnaround Brian saw me and cheered, which was good because I had my head down trying to get up the hill. On my way back from the turnaround I had to yell at Brian as I was running faster than my tracking app thought.

From this point we retraced our tracks. I thought I remembered where I had been, but everything looked different when I headed back. I still felt pretty good at this point, but my watch was telling me I was slowing down. I started doing the math to finish in 2 hours and knew I needed to speed up a bit, but nothing was working. Then once I hit the last mile the road headed straight up at 90 degrees. Ok I’m exaggerating a little, but it was steep. I started doing this weird race walk thing that I hope was not caught on camera.

That last mile killed my chances and I finished in 2:02. I’m pretty proud of my race though. I’ve never seen so many hills. At the finish line there was water, milk, bananas, and some pinwheel sandwiches. I thought we were going to get medals, but when I didn’t I didn’t worry about it too much because I don’t really need another medal. However I got an email the day after saying they are mailing the medals!

It was still raining a bit and cold so we didn’t stick around the finish line too long, but they were handing out beer and had a band playing (both would be nice on a sunny day).